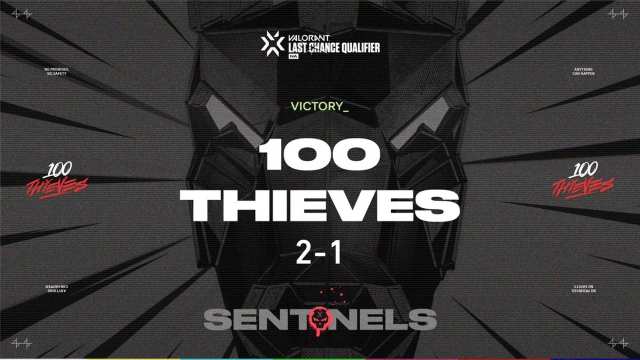 Provided by Riot Games. The winning graphic for 100 Thieves over Sentinels at the VCT 2022 NA LCQ.

In the lower bracket of the VALORANT Champions Tour 2022 North America Last Chance Qualifiers, 100 Thieves beat Sentinels 2-1 and eliminated them from the tournament. The match was back and forth, with the first map going to overtime. However, as the series went on, 100 Thieves caught fire and just managed to stop a comeback to win the series. This ends the Sentinels’ 2022 season, with their LCQ run bringing a lot of entertainment and viewership.

.@100T_Esports pull off a heist and are one step closer to qualifying for Champions. Unfortunately, this means @Sentinels are knocked out of #VALORANTLCQ and their run ends here.

After recently falling to the lower bracket, 100 Thieves didn’t have the easiest start against Sentinels. The first map of Fracture started well, hitting the half up 8-4. But as Sentinels fought back, reaching overtime, the map slipped out of their fingers in a 17-15 loss.

“We felt like we were still in control of the series even after losing Fracture,” Brendon “stellar” McGrath said. “We strayed away from our game plan a little, so we focused more on it on Breeze and it played out well.”

With this win, they will face the victor of the Cloud9 and NRG match. Looking into the future, NRG would be a more comfortable opponent but Cloud9 would be more interesting.

“We’ve played NRG before, and they’re good; but we’ve beat them,” stellar said. “As for Cloud9, we haven’t faced them officially, but [it] would be exciting to play them. People are saying they’ve fallen off, but I don’t think so from our scrims.”

If this is one of the wins on their run to win the LCQ, stellar knows that this is just another step on their way to the top. Their expectations aren’t to get to Champs, but they know they can do it.

“I wouldn’t say a run to Champs is expected but we’ve put in the work and it’s shown,” stellar said. “We’ve put enough work in the downtime to get there, we just have to figure it out in our matches.”

Sentinels fall out in the lower bracket

As for Sentinels, despite fighting tooth and nail, they couldn’t make the dream run happen. With the signings of Michael “shroud” Grzesiek and Jordan “Zellsis” Montemurro, the opportunity for new talent to surprise others with a Champions berth was possible. It showed in their first two matches, a close loss to The Guard and a strong win against Shopify Rebellion. They didn’t fall out in two matches but didn’t survive much longer either, getting eliminated in three.

Looking forward to 2023, the hopes for Sentinels revolve around this new roster of theirs. Zellsis already confirmed that he is staying with the roster, and shroud played above expectations in the tournament. But, for the NA LCQ and 2022, Sentinels are done.