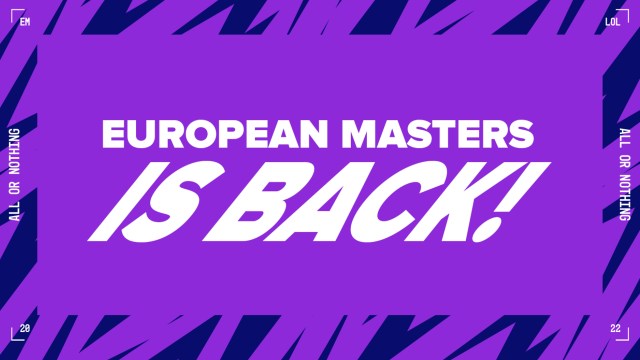 The Amazon European Masters 2022 Spring Season officially announced its starting dates for this spring, as well as the seeding allocation for all the European Regional Leagues in the ecosystem, on Thursday.

Amazon #EUMasters Returns for Spring 2022 – here’s everything you need to know!

The dates for the whole tournament as posted on the lolesports article:-

The format itself has not changed from last year’s EU Masters tournament, with 28 teams being invited from the 12 ERLs, after the Ultraliga was merged with the old Baltic Masters as well as the Dutch & Belgian Leagues merging for 2022.

Last summer’s big change for the tournament included the implementation of best-of-fives from the quarterfinals through the finals, since previous editions only had best-of-threes for both quarter and semifinals. This change remains in place for 2022 spring.

The team allocation for each ERL has received some changes, however, with the full list from the same article once more:-

The French LFL has received an additional seed most likely due to the performance of Karmine Corp’s historic back-to-back titles in 2021. The Ultraliga gets four seeds due to the aforementioned merger, as confirmed on Twitter.

The EU Masters continues its partnership with Amazon from last summer. It is a tournament highlighting the various talents from all over Europe with teams from the League of Legends European Championship keeping an eye for the next big players.

Last year’s EU Masters saw a huge jump in total viewership thanks to Karmine Corp’s participation in the event.

The biggest talking point so far on social media is the Ultraliga and NLC’s team allocations.

The NLC merger happened between the UK and Nordic leagues in the summer of 2020. In 2021, the NLC had two teams reach the finals of the EU Masters, BT Excel in 2021 spring and Fnatic Rising in 2021 summer. However, for 2022, their team allocations has not changed for 2021 and the community has been openly against this decision.

According to Filipe Borges or Varzoc on Twitter, it wasn’t just the merger but also historical results that influenced their decision.

Not just from the merger, but they also have better ranking, both in terms of historical and recent performance, based on the method we have used since the inception of EM.

The ERL community, especially the NLC community and casters, have voiced their disappointment and disbelief on this decision.

There has to be something wrong about spot distribution

I really don’t mean to come across as salty but the more I look at the EUM seeding the less it makes sense, if you account for just NLC it’s only competed in 3 EUMs 2 of which we made top 2. If you want to account for the full history of EUM the UK &Nordics has 5/8 top 4 finishes

Do I even need to say it?

And when UK merged with Nordics for the NLC they stayed at the same spots , despite being a merger. So I need a better PR excuse than they are using the same formula to judge teams. NLC should have at least 2 MainStage spots, it’s not an argument

"Poland gets 4 eumasters spots because they merged with another league and already had 3."

The UK league had 2 spots and merged with the nordic who had 1 spot, yet still only got 2 spots.

Now after 2 NLC teams reach finals in a year, they still have 2?

Varzoc has said they will review the system next season in 2023 and address it if they find any issues.