The Void Jungler was announced in a two-minute cinematic 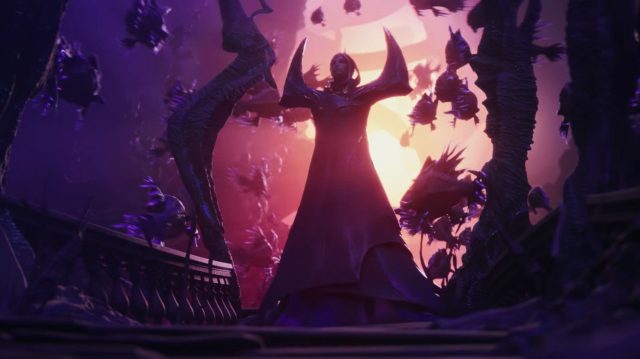 Riot Games announced the newest League of Legends champion, Bel’Veth, in a two-minute cinematic Friday. The announcement has confirmed earlier leaks about the champion that have been coming out over the past few weeks.

In the cinematic, the new champion is seen as an antagonist to Kai’Sa as she ventures through the Void. Eventually Kai’Sa finds Bel’Veth in the middle of a clearing and the two briefly speak. Bel’Veth threatens to “devour” Kai’Sa’s world before the Daughter of the Void jumps into action. Kai’Sa gets smacked around for a while before Bel’Veth delivers a haunting, villainous monologue that promises the beginning of a much larger story. The connection in lore between Kai’Sa and Bel’Veth could lead to in-game voice line teasers.

Aesthetically, Bel’Veth swaps between the appearance of a regal, caped woman and a more monstrous, Void-like manta ray. This matches the leaks that show Bel’Veth’s in-game models. Thematically, everything revolves around the ocean. Bel’Veth has a fish form and she builds a “Lavender Sea” out of her enemies. In the cinematic, Kai’Sa follows a school of fish until she finds Bel’Veth.

The lavender tides are rising. pic.twitter.com/LdJr8Mjydt

Bel’Veth is supposed to be a jungler. She follows as the next Void champion in the same vein as Vel’Koz, Kai’Sa, Rek’Sai and more. In the Riot Games April 2022 Champion Roadmap, the team calls Bel’Veth a skirmisher. She is an Empress who wants to feast on her enemies and add them to her “Lavender Sea.”

In the cinematic, Bel’Veth is also seen to teleport. This matches the leaked ability kit, where her Q is a dash of sorts. If the rest of the kit is accurate, Bel’Veth may be another hybrid Attack Damage and Ability Power champion not dissimilar from Kai’Sa.

Now that Bel’Veth has been fully revealed, it shouldn’t be long until the champion hits the rift.