A competitive and casual COD players' perspectives on the open beta 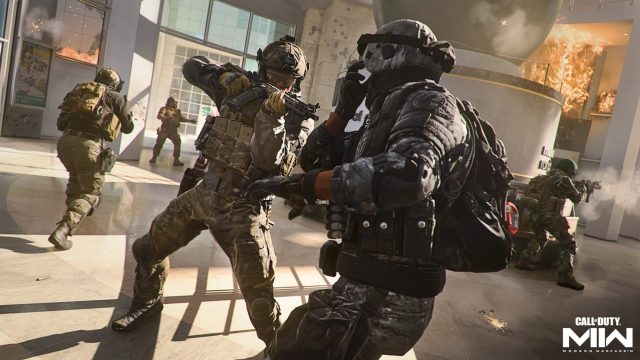 Provided by Activision. A gunfight on the Valderas Museum map.

The Call of Duty: Modern Warfare 2 open beta has just come to a close, with players who preordered the game playing for multiple weekends, opening up to any fan who wanted to join for the final two days. Even with the bugs and flaws, the general feeling around the newest game in the COD franchise is cautious optimism.

Here at Upcomer, main COD writer Joey Carr and returning COD player Michael Czar speak up about their experience with the MWII beta from a competitive and casual perspective.

The discussion around MWII

What was your general enjoyment level throughout the beta?

Joey Carr: In total, I played the MW2 beta for roughly 50 hours across both weekends. While I had a considerably more enjoyable time on the PC version than on PS5, I felt this was a strong beta experience from start to finish. Aside from the PC crashes on day one of the second weekends, I experienced little to no bugs and had a great time learning the ins and outs of a new title. However, I will say, the curious design choices in multiplayer from developer Infinity Ward did slightly hamper my enjoyment throughout the beta.

Michael Czar: Pretty high, if I had to rate it out of 10, probably around 8. As someone who took a break from the COD franchise after Modern Warfare (2019), I tried the recent CODs and just felt like they weren’t for me. I didn’t mind watching others play, or pro players, but the game wasn’t something I enjoyed playing. But, for MWII, the beta gave me those nostalgic feelings of the older CODs but with a modern system. The look is a nice, more realistic reimagining of Modern Warfare 2, but the gameplay is what I expect from it; fast, fun and challenging.

What do you feel is the biggest issue developer Infinity Ward needs to address before Modern Warfare 2’s full release on Oct. 28?

J: There are some glaring problems in Modern Warfare 2’s multiplayer. Infinity Ward addressed most of these concerns in a community update, but not in the way the community would have liked. Honestly, I think the biggest issue the developers need to fix is listening to community feedback. In their community update, the developers essentially doubled down on every controversial design choice they’ve made with MW2. This includes red dots on the mini-map, Dead Silence as a perk, the Perk Packages, and more. The reasoning behind these design choices was given, but they didn’t necessarily make sense. I would love to see Infinity Ward swallow a bit of their pride and listen to the community on some aspects for the full release.

M: Personally, there were only two significant issues, one for gameplay and the other for graphics. Starting with gameplay, it seemed weird how the game kept one of my least favorite features from Modern Warfare (2019), which was the lack of a red dot on the map once an enemy shot without a silencer. I remember the team acknowledged this, but said that they didn’t want to give disadvantages to shooting your gun. I see what they mean, but it just lets people camp certain buildings on maps way more than they should. This might be the more casual fan in me complaining, but fewer campers makes the game more fun.

The other issue was a graphics issue, on PC. Every time a map ended, the screen behind the victory/defeat graphic would flicker between my view and a black screen. There were other times where I would get random flickering black or white screen on a death killcam as well. I don’t get seizures, but the speed of those flashes seemed dangerous, so I hope that can get fixed soon.

J: For me, this is already the most enjoyable Call of Duty title I’ve played since Black Ops 4. Some might say I’m still in the “honeymoon phase” with MW2 and that might be true to an extent. However, I’ve been around this series long enough to know when a game has a solid foundation. Compared to MW2019, this multiplayer is light years ahead in terms of replayability. MW2019 was a camper’s paradise, with giant, convoluted maps and overpowered equipment and perks.

While MW2 has kept some of those same features, the core gameplay simply feels better than MW2019. The gunplay is fantastic, the maps flow well, and the killstreaks are lethal. In my opinion, these three elements were not successfully implemented in the past three years of COD, especially Vanguard. With that groundwork, I think MW2 can be an above-average game, even if Infinity Ward keeps some of the current design choices in place.

M: I can’t speak too much from comparing gameplay to recent titles. But, even as someone who always enjoyed the Black Ops series more than the Modern Warfare one, it’s clear that this beta has the gameplay I’ve enjoyed most in recent years of COD. From the look to the way it plays, I think it improves on the good foundation Modern Warfare (2019) laid down.

Is there anything you want to see added/removed from Modern Warfare 2 before launch?

J: Aside from some of the issues already discussed, I would like to see Infinity Ward add some ways for rushers to play the way they want to play. While the developers have stated they don’t want rushers to move without consequence, I think they’ve gone a little too far with that mantra. Using Dead Silence makes a loud noise and players aren’t even 100% quiet when running with Dead Silence equipped. Add in the fact that footsteps sound like an elephant stomping around on giant leaves and rushers are essentially punished with every move they make. Let rushers rush and let campers camp with the same level of effectiveness.

M: For removal, most of my Modern Warfare II issues revolve around bugs, which makes sense in a beta. As for addition, I’d love to see even more variety for guns. Of course, this would only work if the developers can balance them and make them viable for the future.

What was your favorite weapon from the Modern Warfare II beta?

J: As a traditional rushing type of player, my favorite gun has been the Lachmann Sub (MP5). While I enjoyed the Fennec and even the TAQ-56, the Lachmann Sub was simply too powerful to not use most of the time. It has great mobility, accuracy, and damage range that might be a little too strong. Either way, I had a great time running around on Farm 18 and Mercado Las Almas with the Lachmann Sub and gunning enemies left and right.

M: As of right now, my favorite has to be the Lachmann-762. It’s a battle rifle, which I personally usually like more in CODs than the regular assault rifles. I like having single-shot or three-round burst weapons, and the damage you can pump with a Lachmann-762 surprised me. It’s a great all-around weapon and doesn’t face the same range issues as the M4 or the Kastov-74u.