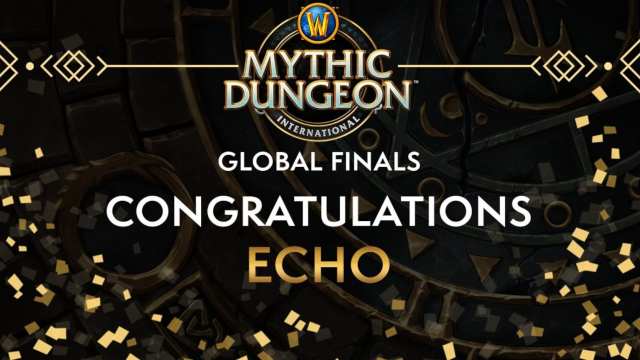 After duking it out in various dungeons while racing against time, Echo won the World of Warcraft Mythic Dungeon International Season 1 Global Finals on April 25. This gives them the World Champions title and the lion’s share of the $300,000 prize pool.

We take the global finals without losing a single map!

Throughout the Mythic Dungeon International Global Finals tournament, Echo went undefeated in every dungeon. They cleared the final mobs and bosses first with the best time.

Echo’s journey to the Grand Finals

In the first round of the event, Echo went up against Stygia in the Mists of Tirna Scithe and Necrotic Wake dungeons, taking down the opposing team 2-0. This meant Stygia fell into the elimination bracket where they had to fight against Does Gargoyle Stream? in order to stay in the tournament.

When Echo faced Obey Alliance in the quarterfinals, they earned two more victories in Plaguefall and the Halls of Atonement. This pushed Obey Alliance into the elimination bracket, where they had to fight against PI Me for a chance at the World Champions title.

Before we start Championship Sunday, lets look at the highlights on how we got here yesterday!

Although Perplexed also got pushed into the Mythic Dungeon International elimination bracket, they made it back on top to face Echo in the final matchup. This time, instead of a best-of-three match, it was a best of five. In the grand finals, Echo achieved a full 3-0 sweep against Perplexed.

“I can’t really describe like how sick this is,” Mike “Gingi” Djebbara from Echo said in a post-match interview. “We went undefeated in the globals.” He then recalled how Echo won games back-to-back and that he couldn’t be happier.

Gingi then noted that he couldn’t ask for a better team. After, he acknowledged his friends, family and fans who tuned into Echo’s streams and congratulated the team.

Along with the title and prize money, the players of Echo received gold medals to commemorate their victory.