Everything to know about MSI 2022

Everything to know about MSI 2022 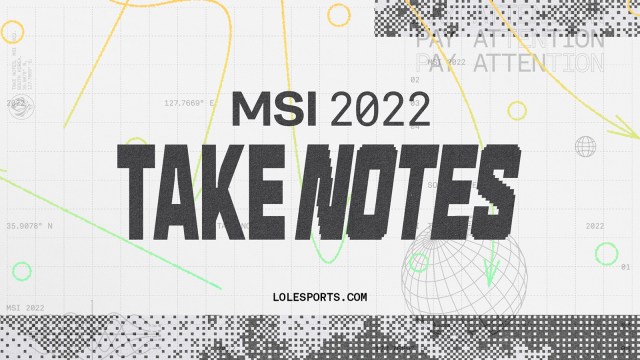 Provided by Riot Games Take Notes? Upcomer's got them. Here are previews of every team playing at MSI 2022 and more.

The 2022 League of Legends Mid-Season Invitational is here. Beginning with the group stage on May 10, the tournament will kick off live from Busan, South Korea as 11 regional champions from around the world square off across the next three weeks to see which team and region can capture the MSI 2022 crown.

The Mid-Season Invitational is League of Legends’ answer to a mid-season international tournament. Instead of waiting to see how regions stack up against each other at the end of the season, MSI gives players and spectators a glimpse at how the best of each region fair at the halfway mark of the year-long season.

Historically, MSI dictates which regions receive extra or better seeds at Worlds in the fall. For example, in 2019, the VCS champions earned their region an extra spot at Worlds thanks to their top six MSI 2019 performance. Of course, there is also regional pride at stake.

Which teams have qualified?

The first stage of MSI, the group stage, is slated to begin on May 10. All matches will be played in Korea and, as a result, times for western fans, start in the early morning. Games begin each of the first three days at 4 a.m. ET. The final three days of the group stage start even earlier, beginning at 2 a.m ET. The group stage will run for six straight days before a slight break and then the rumble stage.

The second and third stages’ times and dates will be announced at a later date.

What happened to the MSI 2021 competitors?

MSI is a yearly tournament, and the League of Legends Pro League’s RNG won in 2021. However, not everyone who made it last time is returning to seek international glory once again. In fact, aside from RNG, only three teams from 2021 are returning. So what happened to the best teams around the world this time last spring? Upcomer took a look and laid everything out for you.