Everything to know about Pokémon Scarlet and Violet pre-order bonuses 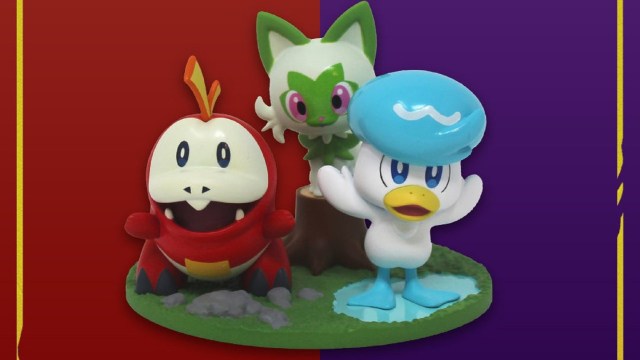 Provided by @GAMEdigital via Twitter Players in the United Kingdom can get their hands on this statue of the Paldea starters.

However, not every website offers the same rewards for purchasing the game early — and some websites don’t offer such bonuses at all. Here’s everything players need to know about the different pre-order bonuses for Pokémon Scarlet and Violet.

Players who pre-order either game from the Pokémon Center before November 11 will get an email with a code they can redeem for an exclusive in-game backpack. In addition, anyone who pre-orders the Double Pack through the Pokémon Center will receive two codes. As a result, they will be able to get the backpack accessory in both versions of the game.

By pre-ordering through Amazon, players can get a download code for an in-game healing set. This set includes 10 Potions, 10 Antidotes, and three Revives. Meanwhile, Best Buy is contributing to the Pokémon Scarlet and Violet pre-order bonuses with a set of in-game berries. It includes one each of the following healing items: Cheri Berry, Chesto Berry, Aspear Berry, Pecha Berry, Persim Berry and Rawst Berry.

Finally, players who pre-order the Double Pack through GameStop will get a set of pins featuring the Scarlet and Violet box Legendaries — Koraidon and Miraidon. In addition, players can order the Double Pack from anywhere to receive two codes for 100 Poké Balls each. This bonus will be available even after the games launch in November.

There are a few other Pokémon Scarlet and Violet pre-order bonuses that are intended for regions outside of the United States. Players who pre-order either game from Walmart Canada will get a Luxury Ball and a Soothe Bell that they can use to increase their Pokémon’s friendship levels.

There is also an exclusive statue available for players who pre-order through GAME UK. This statue includes figurines of Paldea’s three starter Pokémon: Sprigatito, Fuecoco, and Quaxly. Meanwhile, players who pre-order a physical copy of either game in Japan will also receive a commemorative trading card. This card features the Paldean starters alongside Pikachu.

While not strictly pre-order bonuses, there are a couple of other rewards players can obtain by buying Pokémon Scarlet and Violet within a few months of their global launch. Anyone can claim these early purchase bonuses as long as they buy one of the games by February 28, 2023.

Early purchases of the digital version of either game will come with the in-game Adventure Set, which includes 10 Potions, five Full Heals, three Revives, three Ethers, a Rare Candy and a Nugget. Finally, players can get a special Pikachu via Mystery Gift until the end of February. This Pikachu knows the move Fly and has Flying as its Tera type.