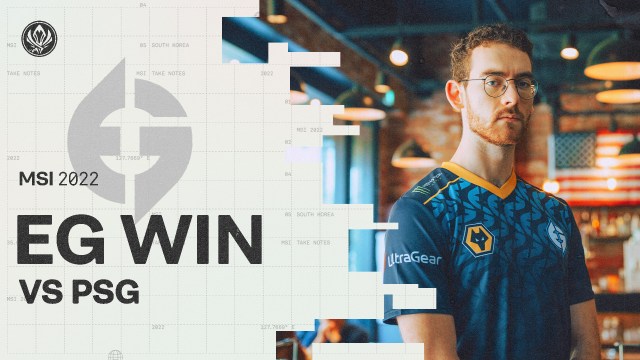 Provided by @lolesports EG pushed PSG to the brink of elimination from MSI 2022 with the win also propelling themselves into the knockout stage.

The League of Legends Championship Series representatives, Evil Geniuses continued to play well at the 2022 Mid-Season Invitational. EG were rewarded for their play when they clinched a spot in the four-team knockout stage on Day 5 of the rumble stage with their win against PSG Talon.

The victory propelled EG to their fifth win. With a two-game lead on PSG for the fourth seed with only one game for each team remaining, there was no way for PSG to jump EG in the standings.

In a virtual elimination game for PSG, the team did not show up against EG. PSG drafted a standard team composition, but EG’s Kyle “Danny” Sakamaki popped off on the rarely played Samira.  Danny went 5/1/10 on the forgotten pick.

PSG’s bot laner Wong “Unified” Chun Kit on Kai’Sa was no match, going 1/4/0 in the loss. EG won the game handily at the 28-minute mark and never struggled at any part of the game. By the time EG took down the Nexus, the team amassed a kill lead of 22-5 and a gold lead of 16k. PSG didn’t even manage to take a single tower.

PSG’s run at MSI 2022 is now over, but it wasn’t without some highlights. The team managed to take down the League of Legends European Championship representatives, G2 Esports, in both of their matches. That was something EG couldn’t do, as they ended up going 0-6 against them throughout the tournament. Unfortunately, it was PSG’s loss against the Vietnam Championship Representatives, Saigon Buffalo, that sealed their fate. That loss made this match against EG a must-win.

As for EG, this is only the third time in the history of the LCS that a team managed to make it to the knockout stage at MSI. The first time was back in 2016, when Counter Logic Gaming made it all the way to the finals before losing to T1 in a 3-0 sweep. However, the last time NA made it to the knockout stage was when Team Liquid did so in 2019. That year, TL managed to pull off a massive upset against Invictus Gaming to qualify for the final.