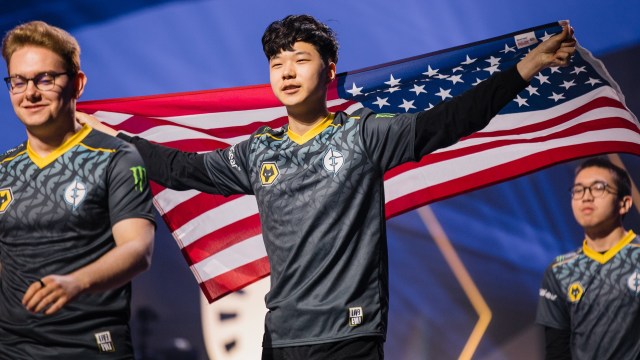 Provided by Riot Games Danny and Jojopyun helped lead Evil Geniuses to their first LCS title as the most talented young duo in North America.

The 2022 League of Legends Championship Series spring playoffs final became one for the history books, as Evil Geniuses captured their first ever domestic title with a 3-0 victory against the defending champions 100 Thieves.

It’s also worth noting that the old guard of the LCS, teams like Cloud9, Team Liquid, TSM and Counter Logic Gaming, was completely absent. In fact, only Team Liquid even had a shot of reaching the final, though they fell to another EG sweep on Saturday. EG also became only the sixth different organization to capture an LCS title.

Each game in the final 3-0 series was a masterclass of outclass, as Evil Geniuses walked right over 100 Thieves in each game. Much of that came off the back of the young, talented, North American duo of Joseph “jojopyun” Joon Pyun and Kyle “Danny” Sakamaki.

Danny showed throughout the playoffs that he is the best bot laner in the entire league. He picked up the series MVP in EG’s rematch against TL in the losers finals and continued to make an impact against 100 Thieves. However, his supporting cast showed up big, too.

Inspired had an amazing finals series, earning one kill and 11 assists on Jarvan IV in Game 1. In Game 2, it was Jeong “Impact” Eon-young’s Mordekaiser making highlight plays while shutting down Kim “Ssumday” Chan-ho.

100 Thieves entered the LCS 2022 spring split as the defending NA champions. Although C9 and TL had better regular seasons, 100 took their third seed in stride. After destroying C9 3-0 in the opening round of the playoffs, 100 Thieves also took down TL in the winners finals, 3-2, to qualify for their second straight final.

100 Thieves’ success in the playoffs was often thanks to their top and jungle combination. Can “Closer” Çelik picked up the MVP in the C9 series while Ssumday picked up the series MVP against TL.

In the playoff grand final, though, Closer couldn’t replicate his success. He was a non-factor in Games 1 and 2 on Trundle and Graves, respectively. Ssumday had a good showing on Aatrox in the first game of the series, but he struggled on Ornn in Game 2.

Evil Geniuses, meanwhile, were unstoppable during their losers bracket run. After Team Liquid sent them down to the losers bracket after a 3-2 series, EG only lost one game on their way to the grand final.

In fact, since that last match, EG went on a 12-1 run, playing on an entirely different level than they did during the regular season. EG were even one game away from not even qualifying for the LCS 2022 spring playoffs.

In the process of winning the spring playoffs, Evil Geniuses will head to the 2022 Mid-Season Invitational in Busan, South Korea as North America’s representative. Like the rest of the teams in the LCS, 100 Thieves are left to lick their wounds and reset before the start of the LCS summer split, which follows MSI.