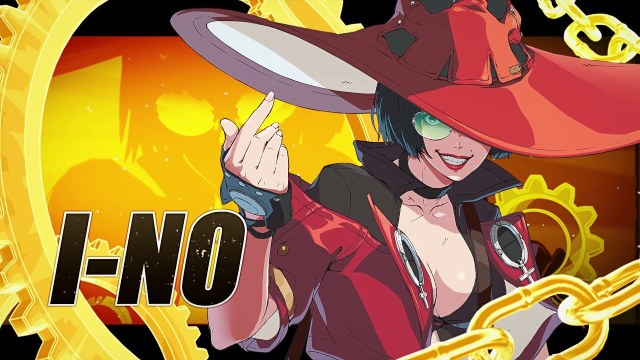 I-No is a fan favorite character who first appeared in Guilty Gear XX as the boss of that game. She is a servant of the series’ main antagonist, That Man, along with Raven. It seems that she will be returning as a boss character in Strive based on what we see in her trailer.

I-No, like many of her fellow Guilty Gear Strive compatriots, sports a redesigned model for the new release. Her new look doubles down on the witch motif, and she has some big Bayonetta vibes this time around. Right away in the trailer we see that she still has her unique, slow, diagonal air dash, which is ideal for setting up overheads and tricky crossups. The trailer shows off some of that potential, too, as I-No lands four overheads in a row on Axl, the final after what appears to be a jump cancel, and ends the combo with a throw.

We also see I-No command dash  right through Leo’s shield. Then we see what is either a super or some sort of special dust attack, ending in an air move that sends Giovanna back to the ground. Her slow-moving fireballs and sound spikes also return from previous games. The trailer also showed off a little bit of story mode content, with her talking to a shaded figure who could be That Man. Since Strive is confirmed to be the final game in Guilty Gear’s ongoing storyline, it makes sense for her to return in an antagonistic capacity.

The Guilty Gear Strive I-No trailer brings the launch roster of the game to 15. While some fan favorite characters like Johnny and Baiken are still missing, we do know that there will be at least one season of post-launch DLC content. Thanks to preorder information, we know that the first season pass will contain five additional characters.

Guilty Gear Strive is less than two months away and releases on April 9. The open beta is still currently ongoing and has been extended an extra two days to Tuesday due to server issues.