The fruit of home grown, North American talent is here 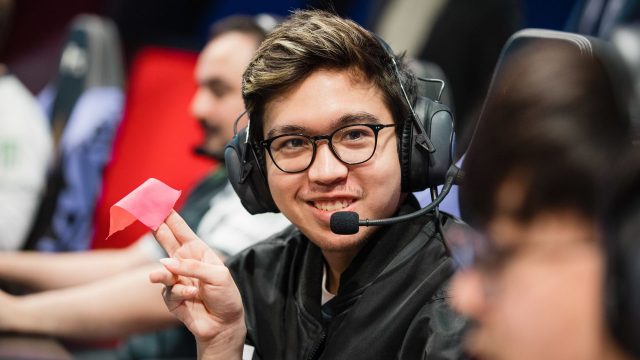 Provided by Riot Games Danny during the 2022 LCS Lock In tournament, well before he became the best bot lane in the region.

Team Liquid were playing on stage in front of thousands of fans for the first time in years, and that stage was set for them. Holding onto a lead in Game 1 against Evil Geniuses and coming off a fight they had won, they were just seconds from taking both the Baron and the momentum in the semifinal of the 2022 League of Legends Championship Series spring playoffs.

The 2021 LCS Rookie of the Year arrived just in time to pick off Baron in one of the most unlikely steals to ever happen, and 12 seconds later he completed his second pentakill of the season in front of a stunned NRG Stadium crowd and an even more shell-shocked Team Liquid on the way to a decisive victory in the opener.

BARON STEAL AND PENTAKILL, @DannnyIoI ARE YOU SERIOUS?! #LCS pic.twitter.com/6Mt4VOhH2X

A quick two games later, Danny had led EG to the 3-0 upset of the league’s top seed, and less than 24 hours later he was holding the LCS trophy after another dominant 3-0 sweep — this time of 100 Thieves in the fastest finals in league history. And just like that, the LCS’ unlikeliest bot laner proved he was also its best.

“I can finally say it,” Danny said after turning in another performance for the history books. “I’ve been able to go from this amateur player to winning the LCS, and it feels amazing,”

He has every reason to feel confident. Much has been made of how young he and teammate Joseph “Jojopyun” Joon Pyun are (18 and 17, respectively), and the pair have come to represent the best young talent in North America. But if they were feeling the pressure of their age — or of the 40,000 fans in attendance over the weekend — they didn’t show it. Danny’s pentakill turned out to be just the opening course, and EG only got more dominant as the weekend went on, despite 100 Thieves’ best efforts to shut down Danny specifically.

It’s a remarkable turnaround for a team that was just one game away from missing the playoffs altogether. For newer viewers, Danny’s rise to the top of the LCS in such a short time might be hard to imagine, but the wunderkind has been outperforming everyone’s expectations since he could first wield a mouse and keyboard.

Danny shot onto the amateur scene in 2020 with Zenith Esports, and he was quickly picked up by Evil Geniuses, who were eager to invest in young talent. And it wasn’t long before he made it clear he was destined for greater things.

Before he was Danny — during the 2021 Academy season — he was ADC God Shiro. I made this graphic and covered his first Academy pentakill on Samira in March 12, 2021.

He’s now tied for the most pentakills in LCS after only two splits.

Evil Geniuses knew what they had. Without making a stop in the Academy scene, they promoted Danny to their LCS squad in 2021 and haven’t looked back. That trajectory culminated this weekend as Danny became the focal point of every game against 100 Thieves — and in every game he came out on top.

After trying and failing to beat Danny at his own game in the opener, they altered course dramatically in game 2. Neither approached worked, and nothing else did, either.

“Danny popped off with Jinx [against Team Liquid], but I trust my players and in the first game I wanted to give my players a shot to show we can play the matchup,” explained 100 Thieves coach Bok “Reapered” Han-gyu. “We were aware that Danny was playing really well and they were as a team. There were things we were concerned with, and they played better today — that’s all there is to say.”

100 Thieves weren’t the first team to underestimate Danny, but will they be the last? With international competition next on the schedule, North America’s hottest young talent is going to find out exactly where he stacks up.

That’s a challenge Danny is embracing. After all, with the confetti streaming and thousands of fans chanting his name, Danny and the rest of EG have taken their place at the top of the LCS. And he’s just getting started.

“After the series, I thought a lot about how far I’ve come,” he added with a grin. “And after that I start thinking about our results.”

In the aftermath of the finals, the entire EG organization donned shirts that read “Witness our Rise.” After the LCS Spring Finals, consider us all witnesses.

Corbin Hosler
Chosler is an esports storyteller who has covered the field for more than a decade. When he's not chasing his kids around he's probably playing Magic: the Gathering.