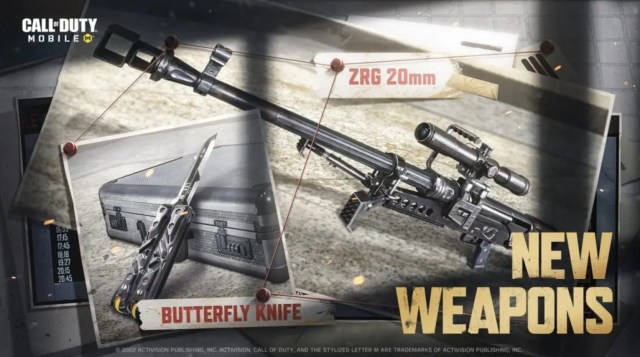 Yesterday, the COD Mobile Season 8 update arrived for all players. The new season, named “Train to Nowhere,” will look to follow up on the success of Season 7, which saw a crossover with the popular Netflix show “Ghost in the Shell: SAC_2045.” So far, the season appears to feature a wide-ranging amount of content, including two new weapons. The new weapons in COD Mobile are the ZRG 20mm sniper and Butterfly Knife. The ZRG 20mm originates from Black Ops Cold War, and it’s also turned into one of the best sniper rifles in Warzone. The Butterfly Knife most recently appeared in Modern Warfare 2019 but also saw action in Black Ops 3 as a Supply Drop weapon.

In COD Mobile Season 8, players can unlock both of these weapons with enough time or money. As always, the main weapon of the season, the ZRG, is locked behind the Battle Pass, which features 100 tiers of content. Like in seasons past, the Season 8 Battle Pass features both a free and premium version. The ZRG 20mm is a part of the free version, so any player can unlock them without paying a dime. As for the Butterfly Knife, players need to complete an in-game challenge.

The focus of this seasonal content — from a weapon perspective — is the ZRG 20mm. Who doesn’t love a powerful sniper rifle that can decimate an entire team with a single clip? In order for players to get their hands on the ZRG, they need to rank up their Season 8 Battle Pass to Tier 21. Once they’ve completed Tier 21, they will fully unlock the ZRG 20mm in multiplayer. From there, players can begin ranking up the ZRG so they can equip its best loadout.

As of right now, we’re unsure of what the challenge will be to unlock the Butterfly Knife. That challenge will become available in COD Mobile on Sept. 15. The challenge will be called “Knife to Meet You,” and it will run until Oct. 12. There will also be a Lucky Draw releasing sometime in Season 8 that will feature a Legendary Butterfly Knife. The Lucky Draw is called “Revenger,” and features a futuristic look with a red color way. We aren’t sure when this Lucky Draw will drop, but players should expect to spend a solid amount of cash to unlock the knife from it.