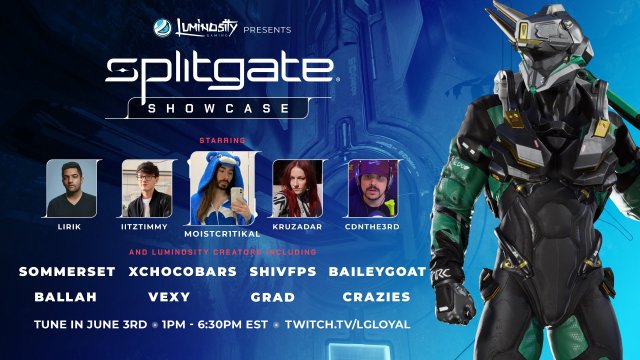 Provided by Luminosity Gaming The Splitgate Showcase will take place on June 3 and show off the new Season 2 update.

Luminosity Gaming have partnered with 1047 Games to host the Splitgate Showcase, an event where streamers, pro players and developers will get together to show off the new season of Splitgate.

The showcase celebrates the release of Splitgate Season 2, which goes public at noon ET on Thursday. Starting at 1 p.m. ET on Friday, content creators will go head-to-head with some of the game’s best esports pros as they explore the new update. The participating streamers include Saqib “LIRIK” Ali Zahib, Timmy “iiTzTimmy” An, Charles “MoistCr1TiKaL” White Jr., Kruzadar, Caesar “CDNThe3rd” Noriega and a handful of Luminosity creators.

Content creators will be joined by developers from 1047 Games — the creators of Splitgate — and Splitgate pros. Aside from previewing Splitgate Season 2, the showcase will also promote the revamped Splitgate Pro Series 2022 Summer Season. Luminosity are one six professional organizations, alongside MoistCr1TiKaL’s new Moist Esports, taking part.

“For me, when they were announcing all the big streamers that are going to be there … I just couldn’t believe it,” Jacob “Crazies” Mean, one of the pros taking part in the Splitgate Showcase, said. “I was freakin’ out.”

Crazies said he is most looking forward to playing with CDNThe3rd and iiTzTimmy, though MoistCr1TiKaL is a close third. He is excited to see how the streamers, most of whom are already well versed in the first person shooter genre, get on with Splitgate. While some, like MoistCr1TiKaL, have a bit of experience in the portal arena shooter, others are coming in fresh.

“They’re not at a super competitive level, but they definitely get what’s going on,” Zachary “ZachsMaxed” Gestring, another Splitgate pro, said. “Obviously you see a bunch of aimers here that are just going to fry people.”

Crazies, ZachsMaxed and other Splitgate pros have already had the opportunity to play Splitgate Season 2 and are looking forward to the public getting their hands on the update. They agreed that Splitgate Season 2 will bring a lot of content creators and casual players to the game.

“This is one of the cleanest updates I’ve seen and one of the biggest changes between seasons that you could see,” ZachsMaxed said. “The amount of variety and stuff getting added is just awesome.”

Tune in to watch the Splitgate Showcase at twitch.tv/lgloyal or on the streams of the participating content creators.

[Disclosure: Luminosity Gaming is a subsidiary of Enthusiast Gaming, which owns and operates Upcomer.]