G2 did not have a good day 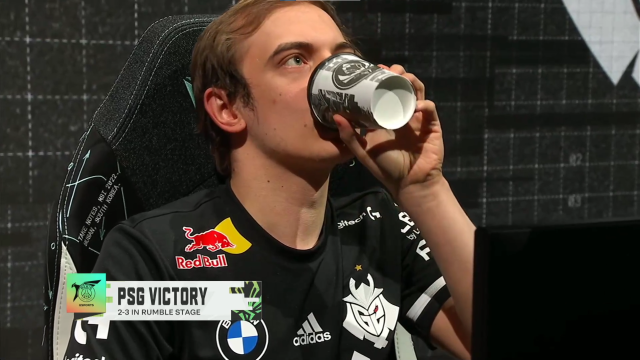 Screenshot provided by Warren Younger/Riot Games G2 fans might be doing their best caPs cosplay after watching their team play on Day 4 of the MSI 2022 Rumble stage.

Day 3 of the 2022 Mid-Season Invitational Rumble stage was definitely the most hype day yet. G2 finally lost and more spicy picks hit Summoner’s Rift. Here is a breakdown of all the best moments from the day at MSI 2022.

Player of the day: RNG GALA

It’s actually unfair at this point. Royal Never Give Up’s bot laner, Chen “GALA” Wei, continued his path of destruction at MSI 2022 with another fantastic day of gapping his lane opponents. He didn’t even die today. The dude went 13/0/5 on the day on Xayah and Kalista.

GALA doesn’t even need to play Kai’Sa or Tristana — he can win on anything. It might seem excessive to keep giving him the call out, but when he isn’t making any mistakes and is severely outplaying all his opponents, how can you not?

Most memorable moment: The win streak is snapped

Depending on who you ask, G2 Esports’ win streak being snapped would generate a happy response or a depressing one. Regardless, it’s clear everyone would feel the impact.

It kind of feels like WWE superstar the Undertaker losing his undefeated streak at Wrestlemania. Well, at least that’s what the European fans made the streak out to be. There was even an official graphic made as people started to actually think G2 could go the entire tournament without dropping a game in the same tournament as the once invincible T1.

PSG fans had a lot to celebrate on Day 3 of the Rumble stage at MSI 2022. Earlier in the day, PSG’s soccer team came to an agreement with megastar Kylian Mbappé to play for PSG through 2025. With the organization in good spirits, they pulled off the biggest upset at MSI 2022 against G2. Salty with the loss, G2 threw up this amazing artwork depicting Mbappé.

After a very eventful day for PSG, sometimes you have to just take it slow and relax. The game is over, so why not just meme in the River on stage in front of hundreds of thousands of fans watching? I, for one, love it.

The second round-robin continues with Day 4 of the MSI 2022 rumble stage. G2 will get their rematch against PSG while also getting to play T1 again. RNG go up against Evil Geniuses, as well. Catch all the action starting at 4 a.m. ET on Monday.