For the game's change to free-to-play, a new anti-cheat system follows 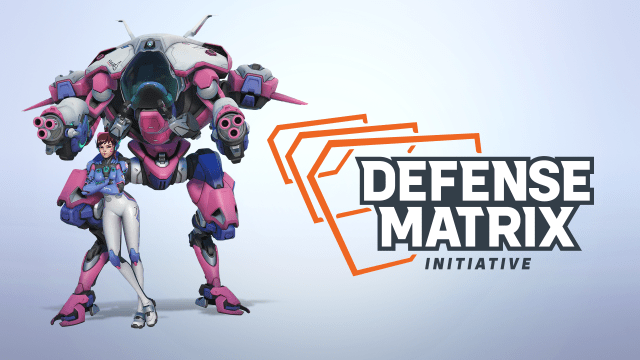 Provided by Activision-Blizzard. The graphic for the Defense Matrix system in Overwatch 2.

With the early access launch of Overwatch 2 coming soon, the development team has revealed their anti-cheat system dubbed Defense Matrix alongside their first-time user experience.

The game’s shift to a free-to-play game means that hackers and smurfs could hypothetically run rampant. This has been a huge problem with other free-to-play games like Apex Legends, Call of Duty: Warzone, and Fortnite. Yet, a recent blog post confirms that the Overwatch 2 team knows that their current anti-cheat plans from the original Overwatch need to change.

Prepare yourselves for the action-packed, free-to-play experience launching October 4! pic.twitter.com/eK1On4ZsiZ

For Overwatch 2, the dev team is bringing in multiple ideas to prevent cheaters, hackers, and even smurfs.

The first one is something that has come into fruition in a lot of free-to-play games: SMS Protect. Essentially, each battle.net account for Overwatch 2 has to be linked to a phone number starting Oct. 4. Players will not be able to have multiple accounts using the same phone number. Lastly, pre-paid or VOIP phone numbers will not work. This will apply to all fans, even ones who own the original Overwatch.

The next addition is more focused on toxicity and how to respond to it in-game. With machine learning and audio transcriptions, the game aims to listen to in-game chats after reports are made. Then, using a voice transcription program, determine what was said and dealing appropriate punishment afterwards. These audio files will be around 30 seconds and deleted after transcription.

While those two additions are key, this is just the start, according to the blog. Internally, the team consists of developers from a wide variety of positions, from designers and producers to data scientists. The post talks about their goals to find these cheats, reverse-engineer them and prevent them from affecting the game. Externally, the post mentions Activision-Blizzard King’s involvement in the Fair Play Alliance, a group containing a lot of game developers with a focus on sharing knowledge to make games fun and fair. And to top it all off, they are in discussions with external partners and vendors who design anti-cheat systems.

One of the ways the team is making it hard for cheaters to affect their competitive mode easily is a new experience for first-time users. Shortened to FTUE on their blog, this process focuses on gradual access to the game. When a new player gets Overwatch 2, they will have to spend a good amount of time learning the game and unlocking heroes before being able to play the competitive mode. According to the blog, that will take around 100 matches, allowing their new players to accommodate themselves to the game.

At the same time, both smurfs and hackers will have to put a lot of time into the game just to start cheating in competitive matches. This will not apply to groups, but the competitive game mode is still locked until the player wins 50 quick play games. Players who have Overwatch accounts before Oct. 4 will not have to go through the FTUE.

Last but not least, there are also a lot of minor changes that the Overwatch 2 team made to prevent toxicity in-game.

First off, player levels and profile borders no longer exist in Overwatch 2. Usually, players use player level and profile borders to judge players when matches began, so the team got rid of them. As for endorsements, you can no longer endorse enemies and there is only one category to endorse teammates with. This change is to endorse players easier and faster, rewarding the highly endorsed with extra battlepass experience.

Overwatch 2 will make some changes to other social features 🛠️

💬 General Chat will be REMOVED
👍 Endorsements be merged into ONE Category
🏆 SR will no longer be displayed on the Pre-Competitive screen pic.twitter.com/ZuN8V3PGe8

Finally, the team has removed the general chat. For the record, this is the white-colored chat from the launch screen. The team explained that they realized it served little purpose other than self-promoting streams or general toxicity.