As the European core leaves, a North American one joins 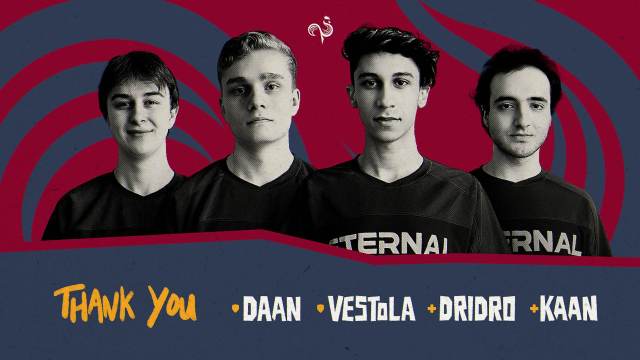 The Paris Eternal have released Emir “Kaan” Okumus, Arthur “dridro” Szanto, Ilari “Vestola” Vestola and Daniël “Daan” Scheltema and signed four new players to replace them. Those players include Luke “Lukemino” Fish, Kyle “Rakattack” Rakauskas, Domenic “Krawi” Akrawi and Josh “MaltheL” Gonzales. This roster change comes after a 1-13 record and a loss to the 0-12 Vancouver Titans, a team that hadn’t beat anyone other than the Boston Uprising in just over two years.

We thank them for their time with us, and we wish them nothing but the best in the future. pic.twitter.com/2N6hFKMsLF

For the future, this makes the Paris Eternal team a North American roster instead of a mixed European one.

This move signifies the end of an era for the Paris Eternal. After finding success mixing European talent with Korean talent in the 2020 season, they moved to a fully European roster in 2021. The players in that core included these four released players along with Nikolai “Naga” Dereli, all helping Paris to an 8-8 record in the 2021 season. Coming into the 2022 season, some big moves were made, adding Lim “Glister” Gil-seong and promoting coach Choi “JMAC” Dae-han to head coach.

It wasn’t without controversy, however, with their former head coach Zouheir “GetAmazed” Baba’s release. He was crucial in their performance in the 2021 season, so fans were curious how the new pieces would fit in Overwatch 2. As the season began and continued, it was clear the Eternal were struggling. Mid-season, they released some players and signed some NA talent. They took some good teams to map five, but only got one win so far this season. That 3-2 over the New York Excelsior was in the Midseason Madness, but they couldn’t manage another win. Then, in the Summer Showdown, their second match against the winless Vancouver Titans was a rough 3-0 loss. Not too long after, the European core was released.

As for the new signings, they all come from not only NA but mostly the same Contenders team. The backline along with Mexican DPS player MaltheL comes from Odyssey, the recent NA Contenders A-Sides champions. Tank player Krawi comes from the team they defeated in those finals, WISP. All of these players are young talent, with the Odyssey crew all under 20 years old. Plus the backline in particular has tons of success in the Contenders scene, with Rakattack and Lukemino also part of victorious teams like Redbird Esports and Maryville Esports.

Today we say goodbye to three of our longtime players. It's been an honor to watch them grow and perform throughout contenders.

We are so proud and can't wait to see them play in OWL! #FiatLux pic.twitter.com/innONf1Ba9

The other two players have their own successful paths as well, with Krawi’s time with WISP leading to a fourth-place NA Contenders finish in Oct. 2021 and a Mayhem Winter Classic win in 2022. MaltheL’s experience on Odyssey through their highs and lows, winning the Aug. 2020 NA Contenders title and staying competitive since then.