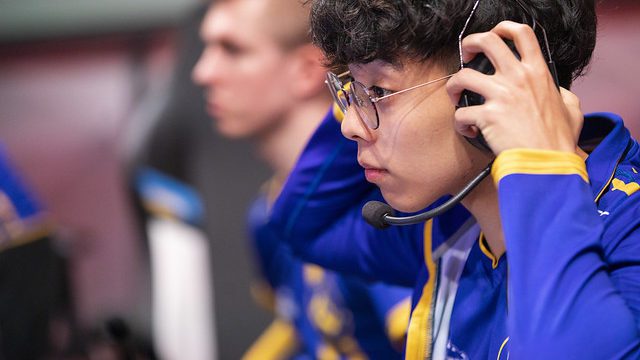 Welcome to Part 6 of the Daily Esports Rocket League Ranked Guide. In this wrap-up guide, we’ll be looking at mechanics that aren’t necessary to reach Grand Champion, such as ceiling shots and flip resets. If you aren’t a GC yet, you should read our Guide to Grand Champion.

Any player can learn these skills whenever they personally want to, regardless of their rank. They’re fun to learn and ultimately all contribute to developing greater mechanical control on the journey to Grand Champion ranks.

Use the wall as a launchpad to start much more creative plays rather than predictable backboard centers or wall-to-air dribbles. Jumping off the wall and using your flip to make contact with the ball mid-air can allow you to create some very unpredictable plays.

Use off-the-wall flips when a teammate passes to you while you’re upfield or when you have an ordinary wall-to-air dribble opportunity. When timed well, a long defensive clearance can transfer immediately into a shot on goal in two touches.

As you become more comfortable with the technique, you can add air-rolling into step 3. This is so that you can more deliberately aim your shot or pass.

Make sure your shot/pass direction is intentional, and be sure you have enough boost to perform your play and recover into your team rotations afterward.

Ceiling shots allow a player to maintain their second flip indefinitely if the car falls from a surface (from the ceiling) without jumping off. This means if you fall from the ceiling, you can choose to strike with the second jump (flip) when you choose. You can transition a wall-to-air dribble opportunity into a ceiling shot just by making minor adjustments to the setup.

There are many further minor adjustments you can make during your ceiling shot setup that you can use to make an even more efficient, creative, and unpredictable shot.

If you find yourself shadowing on defense with low boost, in-and-out saves offer a new way to make a last-effort save. If you haven’t learned shadow defending yet, you can see it in our Rocket League Guide to Champion 2 and 3.

This saving technique involves driving into your goal and looping back out by using the ramp inside your goal. By driving straight into the ramp, you will loop back to face out of your net while upside down. You can then flip into the ball to attempt to clear it.

This essentially uses the same skills required for a ceiling shot but on a much smaller scale. You can either flip from the goal’s inner ceiling to clear the ball or you can aerial outwards if the ball is farther away.

After a successful in-and-out save, you can use your current momentum to chase the ball upfield and start a counterattack.

Dribbling on the ground is an essential skill as a Grand Champion. However, at times, a standard dribble won’t suffice. Ground-to-air dribbles allow you to convert your ground-based possession into an air-dribble and carry the ball right over opposing defenders.

There are two ways to start a ground-to-air dribble. The first is from a bounce on the ground, such as a bounce dribble or half-volley. The second is to convert a ground dribble directly into an air-dribble.

During a single jump ground-to-air dribble, you can then use your second jump before it expires to flip into the ball and take a shot. Turn 45 degrees left or right before the flip so that you use the corner of your car to throw the ball even farther.

After learning the single-jump air-dribble, you can add in the second jump to take the ball even higher. As you’re approaching the ball in step 3, arc your car back a little more and aim to make contact slightly lower on the ball than usual. Time your second jump and boost together just before making contact with the ball. This will push your car upwards at a higher angle and take the ball with it. Continue to feather your boost as necessary to catch up with the ball mid-air and catch it into an air-dribble.

To increase your chances of scoring your air-dribble, convert the final moments of it from a carry into a 50-50. You can do this by allowing the ball to descend slightly more than you and then continuing to push the ball from behind it rather than from underneath. This allows you to guide the ball directly towards the goal and to force a 50-50 right in front of the opponent’s goal.

For practicing purposes, aim to 50-50 with the crossbar. This is to constantly challenge how high you can carry the ball and then descend as quickly as possible into the goal line 50-50.

Rocket League players found out that you can regain your flip by using the ball as a surface (like the ceiling shot). However, this is challenging as the surface is much smaller and also constantly moving.

To do this, you need to make all four wheels of the car make simultaneous contact with the ball. When performed successfully, you will be able to flip again once more.

The most common flip reset is performed from a wall-to-air aerial setup:

Making contact with the ball as it’s falling is much easier to start with. If you can make contact just at the height of the ball’s arc, it will give you more time to adjust for your flip shot as you descend.

You can add in additional touches and air-rolls before making wheel contact to help align yourself with the ball more creatively. You can also do this afterward to make more creative and unpredictable shots.

You can utilize your flips to reach the ball from farther distances with less boost consumption or to redirect the ball from unexpected angles. This is instead of the usual upright flip shots where you flip immediately into the ball from behind.

A pre-flip is the term for a player flipping earlier than usual to make contact with the ball during or as you exit the 360 rotation. You don’t have to complete the full 360 rotation in all situations. You can experiment with flipping early from unconventional angles to cut into the ball’s path and deliver more creative shots on goal.

If you knock the ball far ahead of yourself during a wall-to-air aerial setup, you can use pre-flipping to catch up to the ball and continue your play.

All of these skills are fun to practice for hours on end — a welcoming break for Rocket League players on their Grand Champion journey or to add to their skill sets after reaching GC. The following training pack has levels designed for each of the listed skills.

If you’d like to see more examples of these skills being used at the highest level of competitive play, you should watch the RLCS (Rocket League Championship Series) on the Rocket League Twitch Channel.

A point to remember is that these skills shouldn’t be prioritized over developing the key skills listed in our previous Rocket League guides. It’s more important to have consistent fundamental mechanics and smart positioning/rotations, in or out of Grand Champion. Play safe and smart.