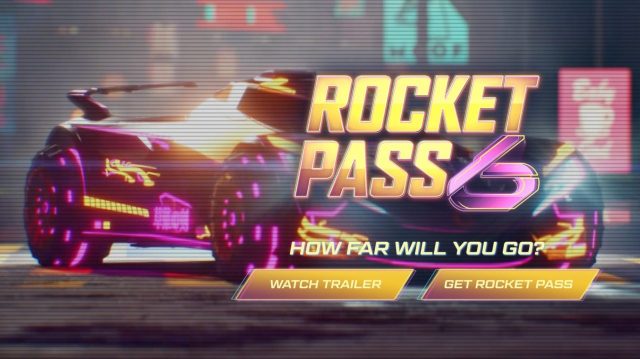 As Season 13 of Rocket League comes to an end, Psyonix has just released its announcement trailer for Rocket Pass 6, which is now scheduled to start with competitive season 14 on March 25. The trailer shows off Psyonix’s love for the cybernetic aesthetic that they’ve been delving into deeper over the past few Rocket Pass releases.

The official Rocket Pass 6 page showcases some of the items that will be available for players to collect such as wheels, decals, and goal explosions. This is achieved by earning XP after completing casual or competitive matches. There are also 1,000 free credits available to collect, Rocket League’s in-game currency, to either tier up further or spend at the in-game cosmetic store.

As usual, the Rocket Pass is available for 1000 credits, or the equivalent of $10 USD. There is another new Battle-Car, Ronin, available for players who purchase the Premium Rocket Pass. Ronin looks as though it will fit into the Dominus or Plank hitbox class.

Players who prefer not to purchase the Premium-tier Rocket Pass 6 can still earn free items up to level 70 of the Standard-tier pass. They will get to complete three weekly challenges in order to earn more experience points, whereas the Premium pass holders will have six to complete.

With the world practicing social distancing, Rocket Pass 6 will be a great way for Rocket League players to keep themselves busy.

Rocket Pass 5 will come to an end along with competitive Season 13 on March 25, so there is still time left for players looking to complete their current Rocket Pass and also earn competitive rewards.

If you’re looking to reach a higher rank, check out the Daily Esports Rocket League rank Guides series. These demonstrate the skills required to reach any rank in RL starting from Platinum all the way up to Grand Champion.