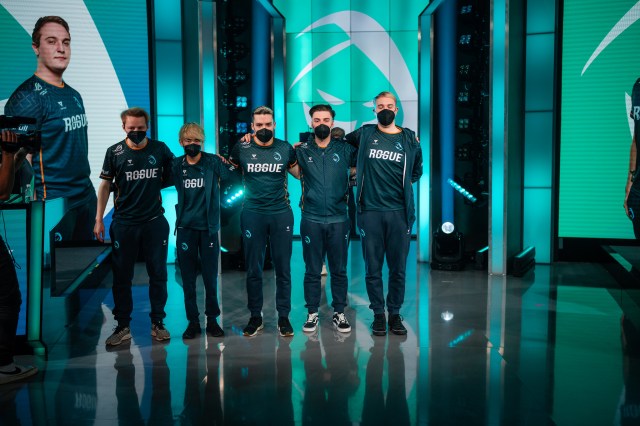 Provided by Riot Games Rogue will now attempt to win the LEC, which they were so close to doing in spring last year

Rogue’s winless streak against Fnatic in League of Legends European Championship playoffs ended on Saturday as they reverse swept Fnatic 3-2 in a tense series to be the first LEC team to make the 2022 spring finals.

Fnatic now move to the LEC lower bracket and will face the winner of Misfits Gaming and G2 Esports, with G2 recently sweeping Team Vitality 3-0 to make it here.

How Rogue swept Fnatic to make the LEC 2022 spring finals

Game 1 was a tense affair. Fnatic found small advantages early on, but Rogue generally kept up with them, finding farm or turrets to keep themselves relevant. The game swung briefly to Fnatic when they secured the Infernal Soul and Baron later. Rogue stalled the game by finding picks during Fnatic’s sieges, and they even managed to get the first Elder Dragon.

33 minutes in, Rogue secured a baron after a hectic scramble. After that both teams continued to dance around objectives and traded kills in extended fights, but Fnatic finally broke the deadlock and ended the game at 43 minutes.

Fnatic had another strong start in Game 2 with jungler Iván “Razork” Martín Díaz continuously ganking to apply pressure. But Rogue held on to turn the tables on them, with Rogue funneling kills and resources to bot laner Markos “Comp” Stamkopoulos on Aphelios .

However, just as Rogue found hope, Fnatic dashed them and came online at 25 minutes to wipe Rogue and take the Baron. From then on, it was all Fnatic and they closed the game at 32 minutes. 2-0 to Fnatic and match point.

Malrang is legit hard griefing with his builds/runes though in this series, but both games RGE are theme-answerd by FNC's comp so it just feels really insane to play and hard. If they draft into vacuum counter again it's just a doomed 3-0 🙁

In Game 3, Rogue decided they wouldn’t let Fnatic have their way and with Kim “Malrang” Geun-seong’s Hecarim pick, they had a much stronger start. Rogue never let up the pressure with mid lane Emil “Larssen” Larsson working in tandem with his team to constantly hound Fnatic. But while Rogue had leads in objectives and kills, they overstepped twice to give Fnatic some moments of reprieve.

But as they say, third time’s a charm and on a third attempt, Rogue broke open Fnatic’s Nexus turrets and took the game at 32 minutes. This was the first time Rogue have taken a game off Fnatic in LEC playoffs history.

Rogue drafted the same mid-jungle of Sylas and Hecarim for Game 4 and started off with the same pattern: Malrang finding as many ganks as possible and a huge fight in the bot lane before 8 minutes saw Rogue go 8 kills up. Rogue were so dominant that they were up by 11k before 17 minutes, with 18 kills to Fnatic’s single kill.

Rogue never let up and with no hiccups like in game 3, Rogue closed the game and made it 2-2. Silver scrapes beckoned.

This is starting to look like an @agorogue game 🤔 pic.twitter.com/Z7kHnNhbpg

Game 5 was all or nothing for both teams. Fnatic were tired of Hecarim and promptly banned it, but Rogue said if it isn’t broken, don’t fix it. Malrang picked Trundle and with Larssen’s Sylas, and they continued to harass Fnatic as with the previous two games and it looked like an exact mirror of them too.

While they didn’t run away with the game like the last two, they controlled the game from start to finish and decisively ended the game in 23 minutes, 3-2 to Rogue.

After the series, Larssen gave a post-match interview to talk a bit about the reverse sweep.

“I never been in a reverse sweep before and I’m just so happy. I think I’ve never been this hype up after a win, honestly,” Larssen said. “It just feels so good to get the reverse sweep and the mental [fortitude] my team showed is absolutely crazy. Last year if we went 0-2 down we’d just mentally break down and run it down in game 3. But now we’re so strong mentally and we have such trust in each other, and it’s such a delight to play with my team.”

Rogue will now wait in the finals to face one of the last four teams in contention for the LEC on April 10, where there will be a live audience and a chance to make MSI 2022 in Busan, South Korea.