Shanghai proves to be the kings of comebacks yet again 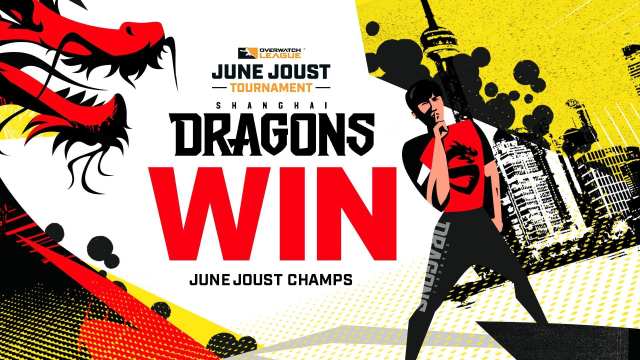 The Shanghai Dragons edged out the Dallas Fuel in a close seven-map series to win the June Joust tournament. After a poor start, the Dragons fought back from the brink of defeat for three maps straight to defeat the Fuel. Now, these two teams have faced each other twice in the only two tournament finals, splitting them each with a win. Shanghai stuck to their guns, playing the Wrecking Ball version of the meta composition. It didn’t start great but proved to be key in their comeback win, harkening back to their previous tournament victories in seasons past.

THE DRAGONS HAVE DONE IT!

Dragons dig a hole and fly out of it

When the first two maps of this finals series were over, the Dragons had put themselves in a deep 0-2 hole. The series looked over as the Fuel only needed one more map win to secure victory. If there was one thing this tournament taught fans, it was that teams are clinical in this meta. Yet, in the finals, these two teams both took each other to the brink. It started with the Dragons in a bad spot, losing control and assault in poor fashion. Dallas didn’t lose a point on either map.

Numbani was the start of the Dragons comeback, with a close 2-1 victory. After that, the Fuel put the Dragons on the brink of elimination after a wild Rialto map. Despite a five-kill D.Va ultimate from Kang “Void” Jun-woo, the Dragons still lost.

THE V IN @Void_OW STANDS FOR FIVE KILLS 🤯💥#ShanghaiDragons #OWL2021

To win this series and the June Joust, the Shanghai Dragons had to win every map from then on. The control map of Busan was first, with the fights going back and forth. The points ended up 2-1 in favor of the Dragons, winning them the map. Koo “Fate” Pan-seung started playing better on Wrecking Ball as the series went on. His coordination with his team was key to many fight wins. Those fights were winning the maps, and turning the momentum of the series.

Eichenwalde proved to be the tipping point for the Dallas Fuel, as they made significant changes to try to win. After losing Eichenwalde, the entire series hinged on one map. On Junkertown, the Fuel decided to mirror the Wrecking Ball composition of the Dragons. While still close, the Dragons pulled through, winning 4-3 after going down 3-1.

The start of a new rivalry

Now, with the Shanghai Dragons winning the June Joust, the two finalists have won a tournament each. The Dallas Fuel and Shanghai Dragons are the top two teams in the league. Even after reaching the finals twice, this tournament win was needed for Shanghai. Their June Joust qualifiers didn’t inspire a lot of confidence, but their performance from the knockouts onwards improved. Their comfort on the Wrecking Ball composition won them this tournament. Now, with the Summer Showdown coming soon and no heroes bans, these two teams are set to slug it out against each other yet again.