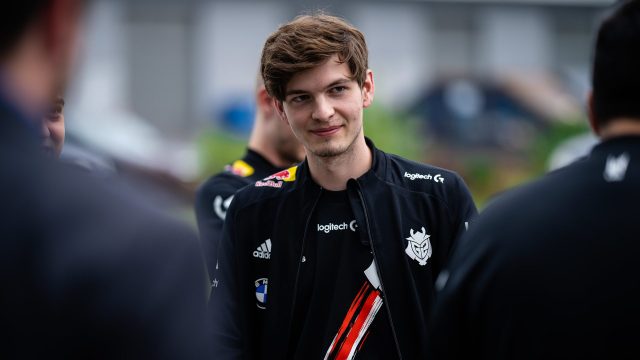 Provided by Riot Games Mikyx is expected to start in Excel's upcoming match against MAD Lions.

Excel Esports have completed the signing of former G2 Esports support Mihael “Mikyx” Mehle, who will play with their League of Legends European Championship roster as soon as Riot Games officially approves the transfer.

Sources close to Upcomer have said that Mikyx is signed on a two-year contract.

First day out of jail 🥷

Welcome @G2Mikyx to the LEC team 👊

Mikyx is expected to start in place of Henk “Advienne” Reijenga in their upcoming Week 3 matches against MAD Lions and Astralis.

Mikyx joins Excel as one of the most successful players and supports in European history. He has won four back-to-back LEC titles, the Mid-Season Invitational 2019 and he made the finals of the 2019 League of Legends World Championship with G2 Esports. After a disappointing 2021 by G2’s standards, Mikyx was among the names on the transfer list.

It is uncertain, at this point, whether Advienne will continue on with Excel as a substitute or play in their academy roster. In the announcement, Excel’s Esports Director Tim Reichert, “We are in talks here and we will be very supportive about that, and figuring out something together.”

Advienne posted a Twitlonger, saying, “This decision was taken by the management only, without any open dialogue with my (now ex) teammates or any heads up to me prior to the decision already being made. This decision, as I’m told, is NOT made based on performance issues, motivation issues, issues with regards to my personality or anything in/out of game related. It is purely a business decision.”

In the Twitlonger, Advienne shared that “during the offseason, Excel made clear that the roster for 2022 was going to be rebuilt around [Mark “Markoon” van Woensel] and I. This gave me a lot of confidence and trust from the org because it felt like I finally ‘earned’ my spot in the LEC.” He went on to say that it “deeply saddens me that I won’t have that opportunity this year to prove and develop myself during a full split in the LEC.”

Mikyx has been a name that was thrown around a lot during the offseason and, ultimately, he wasn’t able to find a team when 2022 started, which many pointed to a high buyout price. G2’s founder and co-owner Carlos “ocelote” Rodríguez Santiago tweeted that Mikyx’s buyout price was drastically lowered in 2021. “We gathered interest from 5+ western orgs, which Miky did not show interest in nor entertained,” he said.

It is not currently known whether Excel paid the 250,000€ pricetag that G2 had set, or if was lowered again for this transfer to happen.

Now that Mikyx has found a new team, he will be expected to help Excel make the LEC playoffs for the first time in the organization’s history. Tim Reichert said, in the announcement, “No, we don’t hope for playoffs. We go to playoffs and we go even further.”

Alejandro Gomis contributed to this report.