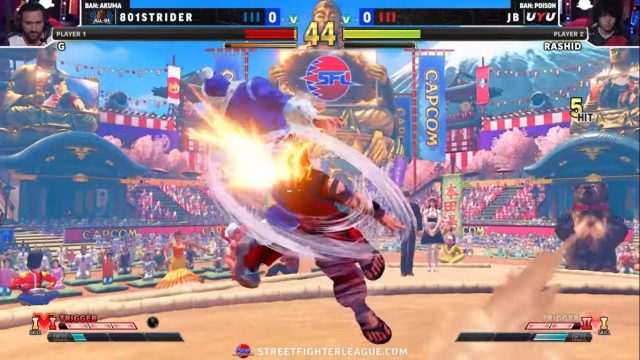 In week 14 of Street Fighter League, UYU tried to make its mark during their final week of competition, and Alpha 3 tried to maintain their top spot against the tiebreaker contender NASR.

The night began with UYU against All-In and tie breakers were now become a huge factor for All-In. UYU chose Poison for the night’s ban targeting iDom and All-In banned Akuma targeting Kami. This still left iDom with his main character Laura, and Kami with his very consistent backup in Seth. Neither of these bans crippled either team, and each player still had tough matchups to deal with. All-In started the night off in a very precarious position, as any losses to UYU could severely damage their tiebreakers. With the top three spots in Street Fighter League so close in the rankings, one bad tie breaker could mean not making it into the playoffs.

801 Strider’s G and JB’s Rashid started the night off with both of their main characters fully unleashed. JB began strong winning game one 2-1 with an amazing read avoiding Strider’s Critical Art in the third round. JB was then also able to take game two 2-0 with a big brain V-Reversal to counter Strider’s own V-Reversal. This was easily JB’s best performance so far this season in Street Fighter League, and each win kept piling the pressure on All-In. Next up was SKZ and Kami in yet another Seth mirror match. Kami started repeating bad habits and not anti airing, which let SKZ get a clean 2-0 win in game one. Kami thankfully began to start adjusting and was able to take back game two 2-1. Despite a valiant effort from Kami staying alive on a pixel of health for almost an entire round, SKZ took game three 2-1 tying up the night 1-1.

Clash of the Captains

Then the captains of All-In and UYU faced off as iDom’s Laura took on Oil King’s Rashid. Oil King started the match off in a dominating fashion taking game one 2-0 with an amazing corner escape utilizing Rashid’s V-Skill 2. Idom answered back taking game two 2-1 despite taking three EX Spinning Mixers to the face on Oil King’s wakeup. Game three ended up a lot more one sided though as iDom took it 2-0 blocking a lot more consistently on Oil King’s wakeup. All-In was now on match point 2-1.

After the two most experienced players on each team faced off, it was then time for the youngest to battle. SKZ’s Seth and JB’s Rashid began the match with the momentum swinging back and forth between both players. JB took game one 2-0 and SKZ took game two 2-1. Then, after a perfectly timed standing heavy kick, JB took the final game 2-1, once again tying up the night 2-2. The final match of the night was iDom’s Laura versus JB’s Rashid. The last time these two players met, it didn’t end well for JB. Sadly, despite his incredible performances the rest of the night, iDom took both games one and two 2-0 winning the night for All-In 3-2.

The second half of the night had NASR versus Alpha 3 with NASR banning Karin targeting Punk and Alpha 3 picking Akuma targeting Samurai. Arguably the two strongest players on each team now had to play their secondary characters. For Punk that meant playing Kolin, but Samurai would have a much more difficult uphill battle with Ryu. The first match was Big Bird’s G and Punk’s Kolin. Game one ended fairly quickly in Big Bird’s favor winning it 2-0. Punk immediately fired back taking game two 2-0 as Samurai cheered on his teammate from behind him. Punk then kept that momentum moving into game three, winning it 2-0. He even went as far as to teabag Big Bird at the end of round two in traditional Punk style. It was all in good fun though, as both teams joked about it after the match ended. It wouldn’t be Street Fighter League without at least a little bit of salt, after all. Alpha 3 had put their first point on the board for the night leading 1-0.

Slowing the night to a crawl

Then came easily the longest and most grinding match of the night as Samurai’s Ryu took on CJ Truth’s Necalli. Street Fighter V is a very explosive game, but these two made it look like two zoners playing Super Turbo. CJ won game one 2-0, backdashing for the last five seconds of the match as Samurai could not deal enough damage in time to win. Samurai then won game two 2-1 after escaping from the corner with a crafty air tatsu. Each round almost went to time as Samurai tried to establish pressure and CJ kept ducking under Ryu’s fireballs with Necalli’s V-Skill 2. Necalli is a very bad matchup for Ryu and, despite Samurai’s best efforts, game three ended with CJ finally taking the match 2-1. Alpha 3 was then ahead 2-0.

The third match of the night was Angry Bird’s Seth versus Nephew’s Kolin. Nephew once again channeled the sprit of Dark Neph as he took game one 2-1. In game two, Angry Bird was able to combo into Critical Art after stealing Vanity Step from Nephew in one of the most impressive combos of the night. Unfortunately for NASR, it wasn’t enough as Nephew also took game two 2-1. Alpha 3 swept NASR, winning the night 3-0.

This was sadly the last night for team UYU in season 3 of Street Fighter League, as their 0-9 record left them out of the tournament. The first bracket of the playoffs is now officially set with Alpha 3 versus All-In. Alpha 3’s lead is undisputed this far into the season, and the only real question is who will rise up to challenge them. All-In and NASR are neck in neck with a 6-3 and 5-3 record respectively. Any loss from either team could ruin their playoff chances. Dynamite and Psycho Shinobi aren’t out of the race yet either. Both teams are now sitting on a 4-5 record and good tie breakers could make either team a dark horse candidate for the Street Fighter League playoffs.

One loss could mean everything

With only three weeks of Street Fighter League left, each match is more important than ever. Week 15 will begin on Feb. 4 at 7 p.m. ET and you can catch it on the Capcom Fighters’ YouTube and Twitch channels.