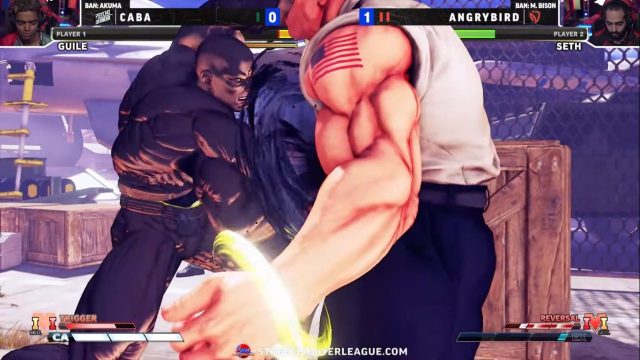 The final week of regular season play for season three of Street Fighter League has passed, as four teams battled it out to see who made it to the playoffs. Here’s a quick recap on the week’s events, showcasing who meets who in the playoff matchups.

The first match of the night was Team Dynamite versus Team Alpha 3. Alpha 3 started the night with an enormous lead on the scoreboard, ahead of the other teams at 8-1. Dynamite was in a tough spot then, as they had to fight for their place in the playoffs against the strongest team this season. Dynamite decided to ban Kolin targeting Nephew and Alpha 3 banned Birdie targeting MenaRD.

So, the match went ahead, as Mena’s Seth took on Nephew’s G. It has been a common strategy for the past couple of weeks to have the most likely ban targets face off against each other first and this night was no different. Mena started the match off winning game one 2-0, controlling the pace of the match. Unfortunately for Nephew, Mena also took game two 2-0, putting Dynamite up on the board 1-0. Mena’s performance let Alpha 3 know that Dynamite wouldn’t be going down without a fight.

Beauty and the Beast

Next up was both team captains squaring off, as Smug’s Balrog faced Punk’s Chun-Li. Punk’s Chun isn’t seen very often, as this is only the third time he has chosen her so far this season. She is a very matchup-specific pick for Punk, and Balrog is one of the characters that fits the bill.

This proved to be the right decision for Punk very quickly, as he took game one 2-0. Smug was able to bring it back in game two though, taking it to 2-1 and ending round one with an instant air jump back jab. Punk fired back by landing a dizzy in the corner at the end of round 2, standing there for a solid five seconds before going in for the kill. Both of these players have played each other many times throughout the years of Street Fighter V, in and out of Street Fighter League, and that familiarity was on full display here.

Game three began with a great V-Reversal from Smug, through Chun’s V-Skill near the end of the round. Smug also displayed an incredible amount of patience as he withstood a barrage of standing hard punches from Chun, and Punk was fished for a clean hit. It came down to the wire in the last round as Smug regained control of the pacing of the match and ended it 2-1. Dynamite was now 2-0 and CJ Truth was all that was left for Alpha 3.

An OCV was certainly possible, which has happened before in this season of Street Fighter League. It would be an incredibly difficult mountain to climb for CJ though, and his first hurdle came in the form of Gamerbee. The Cammy mirror began with Gamerbee taking game one 2-1. Both of these players are great at controlling the pace of matches, and Cammy is a character that can do that exceptionally well. However, the edge went to Gamerbee this night as he won game two 2-1. Dynamite swept Alpha 3 going 3-0 for the night and this netted them some amazing tiebreakers in the process as well. This is the first match Alpha 3 has lost since the first week of the season, and with a team sweep no less.

Dynamite wasn’t in the clear yet though, as the most important match of the night had three team’s fates in the balance. Psycho Shinobi and NASR were neck and neck in the rankings going into tonight’s matches. Each match could mean either securing their playoff hopes, or dashing them completely. Psycho Shinobi banned Akuma targeting Samurai and NASR banned Bison targeting HotDog29. These are the most obvious and effective bans for each team.

The team battle began with Xian versus Angrybird, in what seems to be the weekly tradition of yet another Seth mirror. Xian ended round one with an amazing challenge, jabbing Angrybird on wakeup when he had full meter with Critical Art locked and loaded. Angrybird was then able to come back and take game one 2-1. He continued his huge momentum swing into game two as well, taking that one 2-0. NASR was now on the board 1-0 and Psycho Shinobi had to step it up.

The next match was Caba’s Guile versus Samurai’s Ryu. Since Samurai has been the target of most of NASR’s bans, his secondary pick of Ryu has been doing more harm than good lately. In the current meta of Street Fighter V, Ryu has a ton of bad matchups, and Guile is one of the worst. Guile can do just about everything Ryu does except better, faster, and for more damage.

Caba started the match off winning game one 2-0, ending round one with another instant air jab. Then, Samurai was able to come back and take game two 2-1, with some great fireball pressure from both players. Samurai really started to swing the momentum back in his favor, after landing an amazing EX Shoryuken as Caba chased Samurai down. This all happened during the final seconds of the match, to squeeze in some extra damage before the clock ran out.

Caba was able to bring it back in the third game, winning that 2-0 and tying both teams up for the night. This was the make or break moment for Psycho Shinobi. They had to keep this momentum going to retain their playoff chances. The third match was HotDog29’s Kolin versus Big Bird’s Rashid. Without HotDog29’s main Bison, this was going to be an incredibly difficult match against Big Bird, one of the best Rashids in the world. Unfortunately for HotDog29, Big Bird proved to be too much as he completely dominated the match winning game one 2-0 and game two 2-1. NASR was now on tournament point 2-1.

The fourth match of the night was Caba’s Guile versus Angrybird’s Seth. Certainly a much better matchup for Seth than Ryu, Caba had to hold down the fort for the rest of his team. Angrybird began the match in complete control and didn’t let up, winning both games one and two 2-0, despite a valiant effort from Caba. NASR won the night 3-1 and secured their place in the playoffs.

At the end of the final week of regular season play for season three of Street Fighter League, Alpha 3 held the top spot with an almost flawless record of 8-2. Their only losses coming in the very first and very last weeks of the season. All-In finished 7-3, losing more matches later into the season after starting off with an almost perfect record.

On the opposite end was NASR, who really kicked it up in the last few weeks of the season ending with a record of 6-4. Lastly, Dynamite brings up the rear with an even record of 5-5, just narrowly making it into the playoffs. Psycho Shinobi unfortunately bubbles out of the top four with a final record of 4-6. They played great matches all season, but when three teams are so close to each other in the rankings, one has to drop out.

It all comes down to this

The Street Fighter League playoffs will finally begin on Feb. 11 at 7 p.m. ET, on the Capcom Fighters’ Youtube and Twitch channels. Alpha 3 will face off against All-In on the winner’s side of the bracket, and NASR will play Dynamite on the loser’s side. The winners of both of those team battles will then face each other to find out who gets to play against team Japan in the finals. There, both teams will face off to win the lion’s share of a $150,000 prize pool.

Don’t forget to check out the rest of our Street Fighter League content, like our recent interview with UYU’s JB.