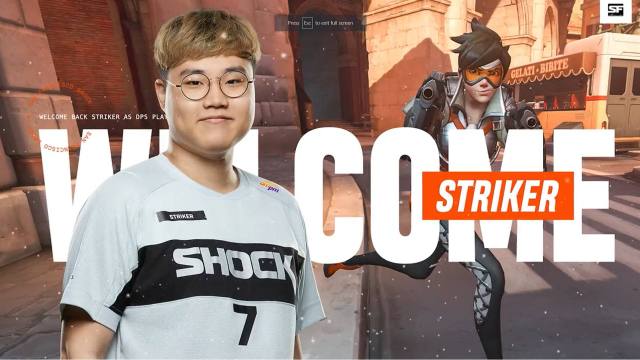 After departing from the Boston Uprising early on in the Overwatch League 2022 season, Kwon “Striker” Nam-joo has returned to the San Francisco Shock. After leaving the Shock at the end of 2021, looking to start anew on his original team Boston Uprising, he’s back with the team he won championships with.

Three years ago today we won our first championship with him.

Striker’s path back to the Shock

Striker is one of the few players still in the Overwatch League that has played since the inaugural season. Starting on the Boston Uprising alongside current head coach Park “Crusty” Dae-hee, he helped lead that team to a third-place regular season. Then, once his coach left to the Shock, Striker soon followed. That proved to be a smart decision, as the 2019 Shock went on to win it all. San Francisco’s roster was insanely deep that year, with Striker playing a key role in specific metas, especially on Tracer and Widowmaker.

The 2020 season proved to be yet another great year for Striker, winning another championship and winning playoff MVP. So when the Shock started slow in 2021, Striker departed the team partway through the season. His retirement was a surprise, with the Shock quickly bringing back a different player in Lee “ANS” Seon-chang to make up for it. Yet, when it came out that the 2022 season would be played on Overwatch 2, Striker came back. He joined the team he debuted with, the Boston Uprising. Yet, that didn’t work out, leaving the team early on in the 2022 season. Striker didn’t specifically mention retirement, so he remained a free agent afterwards. Now, with the Shock looking to improve after losing back-to-back stage finals, Striker is back.

San Francisco’s future towards the end of the 2022 season

With this signing, its clear that the Shock are trying to add some more veteran talent to their young roster. The Shock have been one of the best teams in 2022, but unlike previous years, can’t seem to win when it matters most. Their only player from their championship runs before Striker‘s return was their support player Park “Viol2t” Min-ki.

I'm so happy to be back in shock Since I don't have much time, I'll try harder and win https://t.co/cqCE0xMjFL

Now, with Striker returning, the San Francisco Shock are getting one of the best players in the history of the league. While nobody knows how he will perform, if he can reach his previous highs with his old coach, the Shock have only gotten better.