Terror of the Peaks revealed in MTG Core Set 2021 spoilers

Terror of the Peaks revealed in MTG Core Set 2021 spoilers 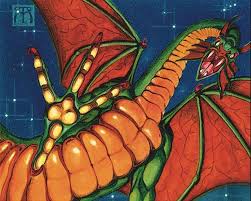 In Magic: The Gathering Core Set 2021 spoilers, Terror of the Peaks is just as intimidating as it sounds. It is a mythic rare 5-drop that you can cast for 3 generic mana and 2 red. It is a 5/4 dragon creature with flying and has two effects. The first effect states that any spell targeting Terror of the Peaks comes with an additional cost of 3 life. The second effect, however, is the one that makes this card truly a terror. Whenever a creature enters the battlefield under your control, you get to burn any target for that creature’s power. Nobody can deny that red has recently gotten some excellent support, and this card is no different.

Terror of the Peaks is in the strange place where its effect is extremely useful but does not fall under any specific play style. It can be used to top off the curve of an aggro deck, but its cost is a bit steep. It can be used in a midrange deck, but its color makes it less than ideal for that. The only deck archetype where it should perform extremely well is in Reanimator. If Reanimator decks become competitively viable, we should see this card on the competitive scene.

Terror of the Peaks in other formats?

Terror of the Peaks comes across the same problem that most cards do in Modern. It lacks identity. I see it being used in low-tier Reanimator decks, but other than that I do not see it being played in Eternal formats that are not Commander. In Commander this card should go well with Kaalia of the Vast, where it can generate a lot of damage for no cost.

In limited formats, this is a bomb through and through. It can give you incredible amounts of value, potentially being deadly in a lot of situations. It doubles as removal when you can play another creature, but as long as you manage to make it stick for more than one turn, which you probably will, it will be a game-changer.