A long-range threat on Caldera in Season 1 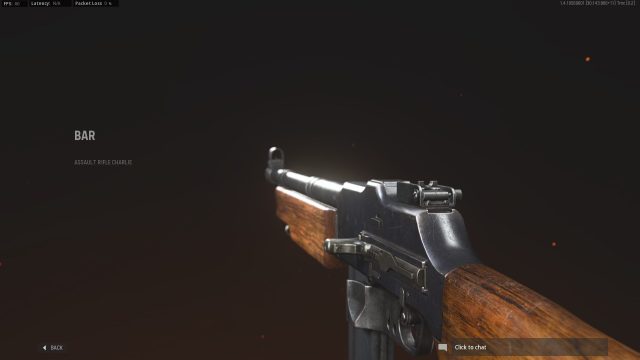 Provided by Activision The gun model for the BAR in Vanguard.

The BAR is one of the more unique weapons from Call of Duty: Vanguard that’s now usable in Warzone Pacific. Season 1 integrated the two games and now the BAR can wreak havoc on the lush landscape of Caldera. However, to get the most out of the BAR in Warzone Pacific Season 1, players will need to equip its best loadout.

Like in Vanguard, the BAR is a slow-firing assault rifle that can deal a ton of damage with well placed shots. The problem with the gun is that sometimes the accuracy doesn’t cooperate with players. Luckily, the recommended loadout for the BAR fixes that issue while also upping its overall damage.

If players haven’t used the BAR at all in Vanguard, then they’ll need to do some serious leveling with it in order to use its top attachments. Those attachments are vital to its success in Warzone Pacific. The BAR needs extra recoil control and damage range to make up for its slower fire rate. If it doesn’t have those padded stats, then it will be outclassed by many other ARs in Warzone Pacific.

Starting things off is the F8 Stabilizer, CGC 27″ 2B barrel, Cooper SP stock and M1941 Hand Stop are all in place to lower the BAR’s recoil. Stippled Grip also helps with this but adds some extra recoil recovery as well.

When players are firing, they’ll have the Lengthened Ammo Type and .50 BMG 40 Round Mag to increase bullet velocity. Rounding out the loadout is the 1229.Slate 3.5x Custom scope, which is perfect for those longer range gunfights players will get in when using the BAR.

The last two attachments is Sleight of Hand for faster reloads and Fully Loaded to ensure players don’t run out of bullets.