An underrated weapon during the MW2 beta 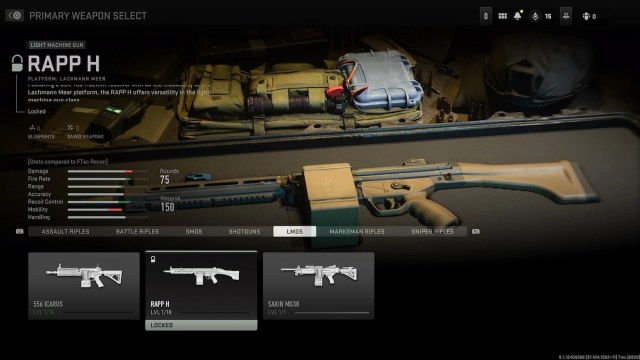 Provided by Activision The gun model for the RAPP-H in Call of Duty: Modern Warfare 2.

Out of all of the weapons in the current Call of Duty: Modern Warfare 2 multiplayer beta, the RAPP-H light machine gun might be the most underrated. A majority of players have flocked to guns like the M4, Lachmann Sub and FSS Hurricane given how strong they are right out of the gate. While those weapons certainly are worth a loadout spot in the Gunsmith, there’s another gun that players are underrating. The RAPP-H might not be the flashiest gun, but it has a rock-solid loadout that can obliterate enemies in Modern Warfare 2.

Though players might be underrating the RAPP-H from a gameplay perspective, some players might not even know how to unlock it. It comes from the Lachmann Platform, which is technically locked in the MW2 beta. In order to unlock the RAPP-H, players had to of performed a glitch in the Gunsmith that gave them access to the Lachmann 556 AR. If players did this and ranked up both the Lachman 556 and the Lachmann Sub, they can equip the RAPP-H. If you fall into this crowd, but don’t know what attachments to run on the light machine gun, then this is the guide for you.

To see the full loadout for the RAPP-H in Modern Warfare 2, keep reading below.

Since the RAPP-H is a light machine gun, players should expect to run slower with it equipped. Aside from its movement speed, though, the RAPP-H acts more like an AR than anything else, especially with its top attachments.

This loadout prioritizes recoil control and mobility over everything else. Since the visual recoil in MW2 is so high in the beta, players want to ensure they can maintain good accuracy with the RAPP-H. They also don’t want to move like a slug, so equipping something like the FT Mobile Stock allows them to compete with other weapons when aiming down sights.