The best LMG in Season 4 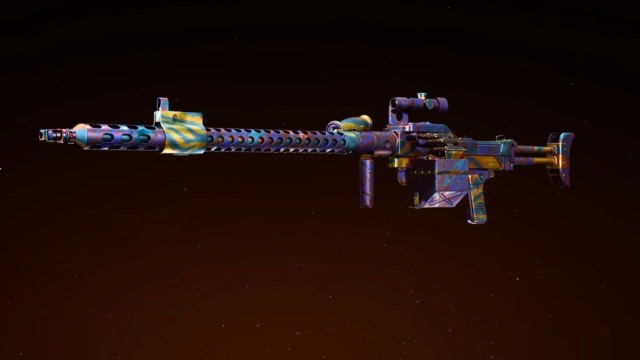 Provided by Activision The gun model for the UGM-8 in Call of Duty: Warzone.

The light machine gun class is on the rise once again in Call of Duty: Warzone. After the UGM-8 and Whitley were both introduced to the game via Vanguard content updates, LMGs began to get picked more than before. These two weapons are fairly neck and neck for the title of the best LMG in Warzone. The Whitley only started gaining traction on the UGM-8 after it was buffed in Season 4 Reloaded, however. Even with that buff, though, fans are still riding with the UGM-8 for now due to its versatile loadout in Warzone.

The UGM-8 actually has two meta loadouts in Season 4; one is a standard, fully-automatic loadout that any player can use and use effectively. The other is a burst-fire loadout that is just as effective but not too welcoming for newer players since it requires more accurate shots. Either way, players have options when it comes to the UGM-8 and its loadout in Warzone. Both of these loadouts feature pinpoint accuracy, solid mobility, and decent damage range for an LMG. One is slightly better than the other, though.

To see the full loadout for the UGM-8 in Warzone Season 4 Reloaded, keep reading below.

For the UGM-8’s recommended set of attachments, we’ve gone with the Bernard XL214 736mm barrel, which is the fully-auto version of the LMG. This loadout is slightly stronger than the burst-fire version simply because of the UGM-8’s accuracy when shooting with this barrel. While the burst-fire version might possess a faster time-to-kill, some players might not be able to hit all of their shots when burst-firing.

The rest of the loadout mainly looks to boost recoil control to further increase the UGM-8’s prowess at long range. At the end of Season 4 in Warzone, the UGM-8 could very well be the best long-range option in the entire game.